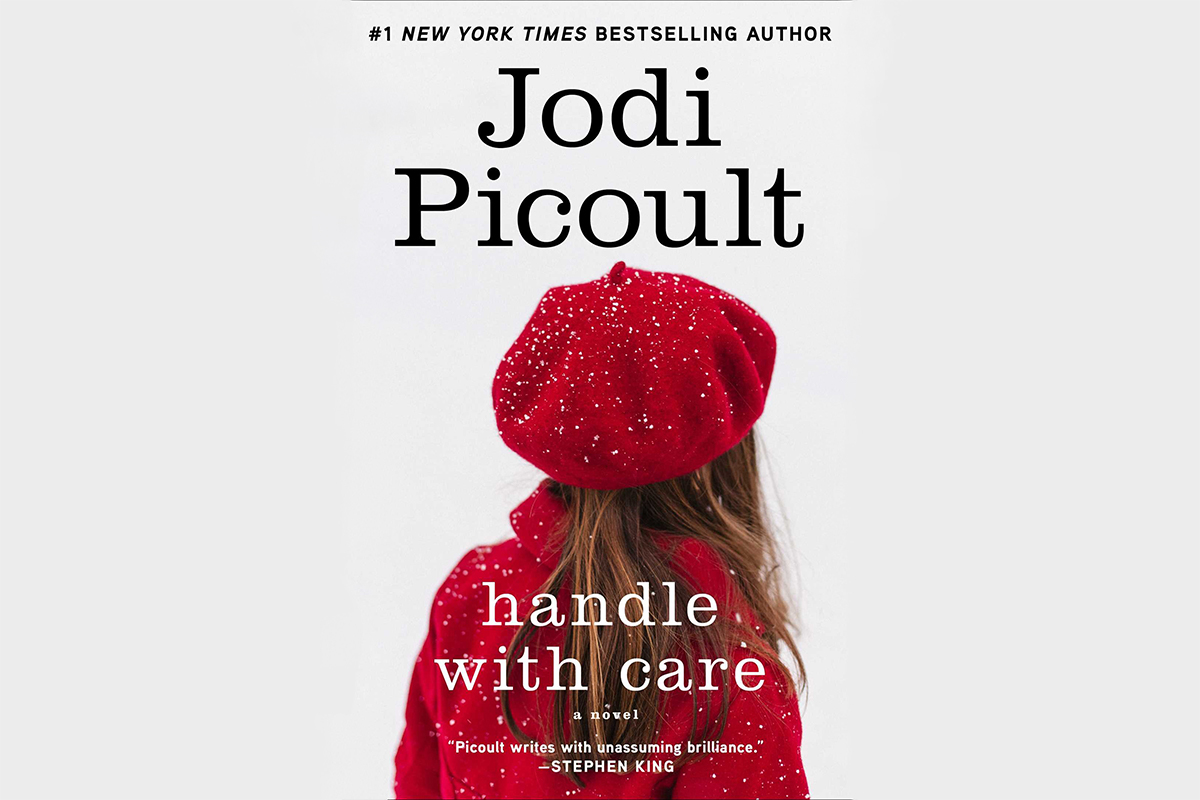 Handle with Care, by Jodi Picoult, tells the story of Charlotte and Sean O’Keefe, parents of Amelia and Willow. Willow suffers from osteogenesis imperfacta, a very rare, severe genetic disorder whose suffers experience fractures from mild, or even no trauma, a disability that affects the entire household—emotionally, financially, romantically. Charlotte’s obstetrician, Piper, is also her best friend. When it is learned that a prenatal diagnosis of Willow’s condition may have been delayed, Charlotte and Sean are divided about what to do. The story explores the dilemma that they each have equal rights in regard to parental consent for their child’s care. The theme of the book tackles many ethical issues, including the abortion of fetuses with prenatal diagnosis of potential disabilities, and the litigious nature of our country; Charlotte, Willow’s mother, decides to sue Piper, her best friend, for medical malpractice to compensate for her daughter’s future healthcare needs. The author calls upon readers to consider the multifaceted nature of concepts like “best interests” and “quality of life,” and enjoins us to recognize life is precious, and sometimes, fleeting.

I had a beautiful baby girl, who was as fragile as a soap bubble. As your mother, I was supposed to protect you. But what if I tried and only wound up doing harm?

Jodi Picoult’s Handle with Care (Atria Books, 2009, ISBN 978-0-7432-9641-0) reminds the reader that right versus wrong is often more complicated than it at first seems. In the story, we are introduced to a family: Charlotte and Sean O’Keefe are parents of Amelia and Willow. Willow, the youngest child, suffers from osteogenesis imperfacta, a very rare, severe genetic disorder that primarily affects bone development and strength. Those with the condition suffer fractures from mild, or even no trauma. Not only is this a physical and emotional burden on the child, the disability affects the entire household—emotionally, financially, romantically.

Charlotte’s obstetrician, Piper, is also her best friend. This greatly complicates matters after it is revealed that a prenatal diagnosis of Willow’s condition may have been delayed. Charlotte and Sean are divided about what to do, creating an ethical dilemma: they each have equal rights in regard to parental consent for their child’s care. The theme of the book tackles many ethical issues, including the abortion of fetuses with prenatal diagnosis of potential disabilities, and the litigious nature of our country; Charlotte, Willow’s mother, decides to sue Piper, her best friend for medical malpractice to compensate for her daughter’s future healthcare needs. Although it is fiction, Handle with Care sheds light on the lives of children with special health care needs and their families, something we, as caregivers, often are not aware.

One line in the opening chapters foreshadows the theme of the entire book. Charlotte is able to see her daughter for the first time after delivery, and she asks herself, “I had a beautiful baby girl, who was as fragile as a soap bubble. As your mother, I was supposed to protect you. But what if I tried and only wound up doing harm?” (p. 7)

We see this emotional tug of war with Charlotte’s character throughout the novel. She fiercely loves Willow, would do anything for her, but also believes that sometimes Willow’s pain is not fair to her child. Willow suffers multiple broken bones and regular physical pain, and cannot play the way a child should; she is just an observer to the life she wishes she was living. Charlotte has the impossible task of caring for her, protecting her, while also knowing Willow may never be able to care for herself. Throughout the story, this struggle and suffering is reflected in her decisions. She continues to forge the path she believes is best, even though her daughter Willow is questioning her own place in the family, everyone’s happiness is threatened, and her relationships and support system crumble around her.

Willow worries that her mother didn’t want her. Even at a young age she understands that her mother, pursuing a lawsuit on her behalf, is saying she would have chosen a life without Willow rather than a life with Willow the way she is. These statements by Charlotte might end up being emotionally more harmful to her family than any of the fractures Willow has suffered. This causes us to wonder how children with disabilities or chronic healthcare needs perceive their families’ struggles caring for them, and how it affects these children’s psychological wellbeing.

Throughout the book, Picoult provokes readers to question their own moral beliefs, and to open up conversation; do you agree with Charlotte, a mother who is trying her best to give her child the greatest life possible, even if it means risking her friendships, her other child, her marriage? If you agree with her, are you a bad person? Would you make the same choices? The author challenges us to think about not only what we would do in the position of the mother in this story, but gives us insight from the point of view of every character affected by Willow’s life. Willow’s sister Amelia feels neglected, ignored, and is harming herself and acting to no one’s notice; Charlotte is so focused on Willow that she completely misses this behavior and ignores Amelia’s acting out. Her entire family is suffering because of her decision to move forward with her plan.

Willow’s father Sean is put down, told he doesn’t make enough with his job to support his family. He is devastated by what he perceives as his wife’s betrayal. Charlotte decides to move forward with the lawsuit even though she knows he disagrees. Sean has always felt alienated when it comes to Willow’s care, and this lawsuit is just another way he is excluded from the decisions made for his family. The obstetrician and best friend, Piper, who didn’t catch the diagnosis on the first ultrasound, is insulted, and her professional confidence is shaken by someone she loves and trusts to the core. All of these characters love Willow fiercely in their own way. Marin, Charlotte’s lawyer struggles with the idea of abortion because she was adopted, and knows that her future could have been erased without her mother’s decision to move forward with her pregnancy.

Throughout our medical training in pediatrics, we have taken care of many children with different abilities. We have seen and heard families of children with disabilities be torn apart by their child’s medical needs. Parents disagree on what is in their child’s best interests. As medical professionals who care deeply for our patients, seeing a child living a life that we do not consider to be one of quality can cause us to suffer as well. Here the “best interest principle” walks a fine line; am I allowed to judge what is in a child’s best interest, what their home life should look like, what constitutes a quality of life? I am not in that home every day, and I am not part of their family. Is quality of life being able to speak, and eat, and perform basic skills of daily living? Is quality of life being able to smile, and be loved? Is it possessing just a heartbeat? Though Willow has many fractures and is in pain, she can joke, and laugh, and read, and is portrayed as a smart, loving child with a good quality of life. The author describes a child with a severe disability, but one who is a highly functional protagonist with humor, smarts, and many other abilities.

One of the remarkable parts of the book is the way the author leans on the fact that the mother is a baker. Baking, unlike cooking, requires a combination of precise measurements, carefully controlled temperatures, and detailed techniques to achieve the desired result. Baking is similar to how many in the healthcare field learn to practice science; the chemistry behind building the final product. However, baking and chemistry are also the same in the sense that with each added variable, there is a risk the final product may not come out as desired; in science we call this “error.” Error can come from something as simple as using room temperature butter vs refrigerated butter, the humidity in the air, the elevation of the location. One small variable that sets the entire process off course. Even with doing everything perfect, even with measuring everything to the closest gram, there are variables that can throw off a recipe.

The same can be said for embryogenesis; genes coming together with all the ingredients, but through the complexity of the process, something unexpected can occur. The mother in the story is a baker, and knows where errors in the recipe can lead to a failure in a dessert. Life, like baking, can be affected by unforeseen and uncontrollable variables that leave you with an unexpected result.

In the last chapter, an unexpected event written from the voice of Willow powerfully illustrates the point that life is precious, and sometimes fleeting. This book shares a powerful lesson: living is one thing, but living well, happy with every day that passes, is perhaps more important. It also reminds us that we cannot always make choices for our children, no matter how hard we try to protect them.